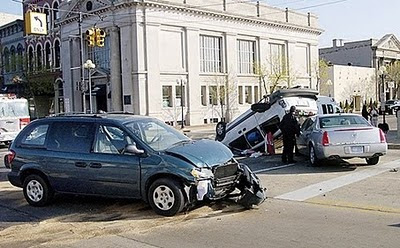 A Parabolic Tale of Woe

There is a road accident involving three cars: my Aardvan, a doctor's new BMW, and a beater driven by a drunk. The doc gets out to survey the damage. His Beemer is totaled, and he is shaken but unhurt, having been protected by the forty-seven airbags that deployed on impact. The drunk who caused it all is relaxed, unhurt save for some bruising, and his '74 Impala is crumpled but driveable. The Aardvan, apparently built out of cola cans, has shredded places with sharp bits, one of which has nicked the Dread Dormomoo's femoral artery, which is fountaining. I am freaking, and trying to stanch the flow. I happen to see the doc, face contorted in fury, pull out a gun and put an end to the drunk's DUI career.

I have a choice. I can call the cops, and have the doc hauled away for Murder Most Foul, OR, I can call the doctor over, smoking gun still in hand, and have him save my wife with his expertise, and then let jurisprudence take its course.

I know what the White House would do, because they are doing so on the Gulf Coast. Having the Progressive's penchant for focusing on drilling for dollars, they are spending much time and energy extracting bucks from BP, rather than letting them focus on the job at hand, stopping the oil leak.

I have no great love for BP, but they do have expertise that, I believe, could be more fruitfully brought to bear on the problem if BHO would back off, and leave the strong-arming 'til after the faucet is closed.

Are you trying to give me a friggin' heart attack!

It wasn't until you segued into the BP mess that I realised your story was metaphorical rather than factual.

Still, I have to admit it certainly was an effective way to get your point across. My pulse is still north of 100 bpm.

So sorry, Rigel. Have a little lie-down.

Rigel - Thank you for your concern. I hope you have a quick recovery from the initial shock of my fictional injury.

Yeah, don't do that.

I don't see it happening that way.
All the people that took care of Exxon-Valdiz are stiff-city, didn't keep very good records or both, so the modern folks too lazy to read anything not on an Ipod screen are puttering about, saying "I dunno" and playing a guess-and-wait game to see what everybody else will do about it (How 'chuckers usually solve problems, other than blaming honkee and watching Rev's Al and Jesse collect their extortion from same).

But Ted, it's what they ARE doing. That's where this multi-billion-dollar escrow fund came from. Rather than dealing with the REAL problem first, the Administration is all over the map with ideas, especially how to MAKE BP PAY!

Yet Obama and Co. refused help from the Dutch three days after the blowout.

Taxes and Penalties. Almost as important as abortion to the Liberal/Progressive mind. Almost.

Wow, Vidad...I titled the thing after Rigel's coronary, and STILL you are affected.

Either I have a piquant writing style, or The Dread Dormomoo is one of the most beloved persons on the intarwebs....

'Vark: You know you've done it when you get Vidad to imply that he's swearing. That said, I thoroughly agree with the second rationale you gave for our reactions.

Okay, okay. There might be some truth to the first rationale as well.

Dormomoo: I'm doing well, thanks for the concern. My doctor did recommend that I do something to get my heart rate up every day. Still, I don't think this is quite what she had in mind...