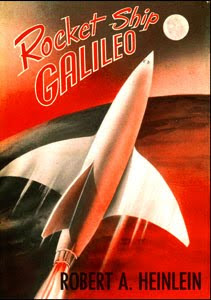 I have been a science fiction fan for almost as long as I have memories. I remember "It Came From Beneath the Sea" being shown on TV, along with the Ivan Tors series "The Man and the Challenge". Of course, "SUPERCAR" goes without saying. Later, I became a voracious reader of everything from The War of the Worlds and the SF short stories in "Boys Life" magazine. It wasn't until college that I became introduced to fantasy as a genre.
(I include McCaffrey's Dragonriders of Pern series in that pigeonhole, though she has science elements in the stories. Go ahead and complain.) Lewis, Tolkien, Charles Williams all contributed to my fondness for both types of story. Heinlein was my favorite hard SF author, followed by Bradbury, for his glorious evocative prose. College found me in the clutches of Niven and Pournelle. I did not, however, discover SF fandom until 1980, when I attended my first convention: PhilCon 80. It was our first foray into the world of huckstering (the selling of fannish goodies at a con). It was that which introduced me to the wild and wacky world of SF fandom, and SF conventions (would that be SF Con-dom?)

The Dread Dormomoo has been an artist most of her life, and picked up the airbrush in 1980. We took her t-shirt painting setup all the way from the Grand Strand of SC to Philadelphia, in our little blue Monza wagon. She was a hit, but we learned the quirkiness of SF fans right off while she was painting unicorns and rockets on shirts when a lady came up and asked if DD could paint a portrait of Johnny Mathis on a shirt.

The DD could, and did. Later on at MunchCon, held at Marshall University in Huntington, WV, we had a lass combine her interests by having the saucer of the USS Enterprise, with a unicorn rampant, put on a shirt. Then came the endless string of D&D players who had her paint their game characters on shirts: elves, dwarves, orcs, you name it.

MUCH later, after we began screenprinting our own designs to sell, the guys popped out of the woodwork to fix our shirts, to make them O so much funnier. One of our earliest designs was the "classic":

For those educated after the Seventies, this was a takeoff on the Dick and Jane readers:

Now, the helpful souls, usually bearded and stooped, would sonorously intone: "You need to add a fourth line: 'RUN\DAMMIT\RUN'."; never mind that it completely misses the syntax of the original first grade reader quote. Admittedly, that is more annoying than anything, but the modern trend is far worse. The old-school SF cons were built around the science in science fiction. panels about space travel and even time travel abounded.
Today, the shift from science to psy-ence has taken its toll: fans of the "telepathic lesbian were-seal"-type stories are numerous, as are their preferred plotlines, shaky on the hard sciences, strong in agnostic or a-theist mysticism. One of the last SF cons I attended featured at least one author of that ilk, and in the dealer room (one is not a huckster any more) there was a nice lady with a webcam, and "video aura" software, which would visualise your chakras. (Now, I remember a couple of conventions years ago where the guys had a Polaroid camera with a diffraction grating over the lens, which gave you a lovely rainbow "aura" from the backlight. Ooooooh, lookit my aura!) This modern version spits out a printed book with your image, and various interpretations of the picture. The lady then gave a 15-20 minute counseling session. The customer paid real money to a total stranger to advise him about his life. Another woman, a guest of the con, offered Tarot readings to the infidel faithful.

Hmmmm...let us step back and examine the context. These women are not advising Heads of State, nor the Crown Princes of Europe. They are doing fortunetelling at a science fiction convention. A small one. In the huckster room.

Current science fiction fandom has abandoned its science for credulity, its Western skepticism for non-theistic open-mindedness. The "thump" you hear is its collective brain falling out.
Posted by The Aardvark at 6/02/2010 10:52:00 PM

This is SOOOOOOOO right on!
Modern "science"-fiction is light on science and heavy on fiction, but then what do you expect when hoardes of mulleted, effeminate-voiced, Birkenstock-wearing "sensitive intellectual" types are running about like chicken little, preaching the false gospel of the greatest bullshit story ever told: AGW/CC?
When I noticed Sci-Fi channel couldn't show anything that wasn't about werewolves, mind-power, witchcraft or the latest dead-horse, zombies, I knew we were on a dark, downward path to nowhere.

Ted, don't GET me started on "Syfy" (I mean, come on, they can't even SPELL it anymore!) It is the outlet for the Canadian government-subsidized film industry's effluent. Canada flushes, we watch.

Of course, the reason for all the Canadian production is that it is so much cheaper to film in Vancouver, BC, and environs because of the unions in California. X-Files was filmed in Vancouver. The unions have priced themselves out of the game for many realistic producers.

If Syfy is an indication, it is especially true of producers who cannot afford good scripts.

But c'mon Ted....SHARKTOPUS!
What's not to love? Roger Corman does a movie about a Sharktopus!