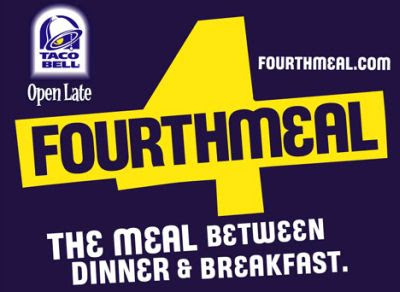 The Glutting of America

"In my day", he began in a crotchety tone, "we had one meal every three weeks! Di'n't hurt us none...." Here he trailed off as drool began to collect on his bib.
When I was in college, doing environmental studies things, I developed an intense loathing for McDonalds. The idea of perfectly good burgers being thrown away after a few minutes incensed me to no end, especially as there were the Poor and the Homeless to be fed. Vacuum-sealing the older burgers and having the homeless shelter pick 'em up seemed a perfectly reasonable solution to me. Of course, all the other burger mills do the same thing, tossing out perfectly good food after X minutes in the name of Quality Control.

At the same time that BK or Micky-Dee's are tossing food into the trash, they are feeding overstuffed Americans a cheap diet of fat-infused potatoes, fatty burger 'n' bun combos, and syrupy soft drinks. Oh, and apple sticks, with caramel dipping goo. That makes it a healthy, balanced meal.

Cap'n D's, has a new product line: Biscuit-battered fish and shrimp. Not merely breaded; biscuit-ized, and served with white flour and grease-based sawmill gravy. And mashed potatoes. You CAN order green beans....So, you get fried biscuit dough coated fish, over which you pour peppery biscuit-goo, with a side of green be...no, I can't even say it.

We have a world filled with the hungry, some even in our country, yet we have ad campaigns like the above "Fourthmeal" abomination. People who may get a single poor meal a day are rife on the planet (primarily due to the unrighteousness of their ostensible leaders), yet we have advertisements here that tout "the meal between dinner and breakfast". Three meals are not enough in America. A single hunger pang at 10PM, and hey, presto, FOURTHMEAL!

In 1983, a spinoff of M*A*S*H, AfterM*A*S*H featured Klinger's Korean wife Soon-Lee. One of the amusing bits featured her being taken to a restaurant, where she refers to the appetizer as "the meal before the meal". Very apt. When I was a kid, desserts were sparse...one serving,as were snacks. Three Oreos and milk.
Now, who stops at five or six cookies? We get peckish, and eat a half-a-bag of chips. At Tuscaloosa last weekend, I was amazed at the number of buffet restaurants. There was one called "Buffet City". The ad writes itself:

Look at the people walking down the street. How many are reasonably proportioned?
How many look like the poster child for Golden Corral? ( I say this as more grocer-than-burglar-like, meself.)

The unrestrained appetite of Americans for food food FOOD is troubling, and seems symptomatic of a general emptiness...lack of quality relationships, meaningful work, creativity, community. We try to fill the God-shaped hole with all sorts of other things; why not Twinkies amd Big Macs?

That's why I endlessly make fun of fat people. What we need is SHAME!

Actually, I feel ill when I mis-eat. I have no idea how people can eat McDonalds and drink soda without falling over.

Maybe I'm just tender... but a couple days like that and I'd die.

Or maybe we just like good burgers fast at a cheap price? A double-pounder with cheese, crispy fries, and ice-cold drink really hit the spot when I'm watching a good ballgame with the boys. Food is food- why did you have to go all hippie about it?

Yes, food IS food, and gluttony is gluttony. Enjoying a burger with the kiddies is great. I travel by van to many conventions as a (non-food) vendor, and I bless Burger King as a source of cheap decent food on a regular basis. This, however, is NOT the point. Look at the kids at your school, the teachers in the teachers lounge, or the people walking the mall. Do they more closely resemble a ruler, or a ball? THAT is the point. The US is full of The Full. The rest of the world is not. I am chiefly concerned with the American "Can't get enough" mentality. It is hurting our health (and I am NOT a sprinter!) and our image in the world.

How exactly is this hippie?

I AM amused at your use of "Double-pounder".