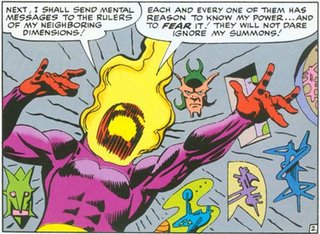 There is an arch-fiend from the good old Lee/Kirby days of Dr.Strange named the Dread Dormammu.
From the halcyon days of watching "Animaniacs" with the kinder, as well as the same days of comic books and cards, the kids began to call me "Dadoo" (from Wacko Warner asking Death "may we call you Dadoo...?"). So it was only natural that they started "Momoo" as well. Since she is... firm in her convictions, and fierce in her loyalties, the persona of "The Dread Dormomoo" came to be.
Enjoy the pic. She's much prettier in Real Life, but I won't be putting a real pic, she being shy and retiring and all.

I always enjoyed the Anamaniacs! Nothing is better than a cartoon anyone can watch and get a laugh out of, and at your level of growth as well!

I admit to a great fondness for Freakazoid, too.I've got cartoons in my attic, feller-me-lad. As opposed to mere Voices in my head...