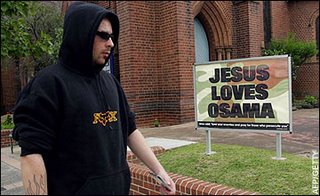 There has been no truer word spoken. The sign is utterly appropriate and correct. The church MUST act as Nathan to the country's David, proclaiming the truth of God's Word. The Scripture
verse below the sign is apt. "Love your enemies and pray for those who persecute you".

Jesus said that. So should we.

All of this is NOT to say that Jesus condones bin Laden's murderous bent, any more than he does our various lying, covetous, prideful, or adulterous proclivities, but rather that Jesus' redemptive sacrifice extends EVEN to the Osamas, Pol Pots, and Castros of the world, if they would but repent, and take the proffered gift, obeying Messiah as Lord.

Pray for those...for the weapons in our spiritual war are not physical, but are mighty before God....

HOW STUPID CAN YOU BE?

I mean, you have kept Ted Kennedy in drink for decades, and I shan't even discuss John Kerry.
Your Big Dig project is a fiasco, but this?

Out of nine cities that were targeted by this guerrilla marketing ploy, only you went tilt.

Boxes with a cartoon character outlined in LEDs paralyzed the city. What an amazing example of the Nanny State in action.

On the flip side, Turner Broadcasting should pony up every penny for the defense of the two fellows who placed the ad displays.

I don't know about you, but, I had a serious belly guffaw over it.

Yeah, the brain dead mayor was a major larf.
He should be on the Simpsons.

The thing that hurt my head was that the other eight cities had ZERO angst over the deal.

Well, they both have something to do with JFK, it all fits:)

Anyway, I just wanted to say, the church that put up that sign didn't seem to be loving, they seem to be political. That type of politics is why I went to the Catholic Church to be honest, leaving Presby, Episc., and in fact every protestant learning I had grown up with.

Now, I know there are good Christians in those churches, but when the church leaderships consistently shovel things that go against how I understand God, sin, love of my country, and fiscal matters, as well as subjugating themselves to the state, I had to pull up stakes and move. So, by all means love your enemy. Kill him if necessary, but love him while you do it. But for heavens sake, don't kick sand in the face of the one nation that actually does, as a state, try to love it's neighbors so much we bleed, frequently.

I hope I'm not Monty Pythoning?