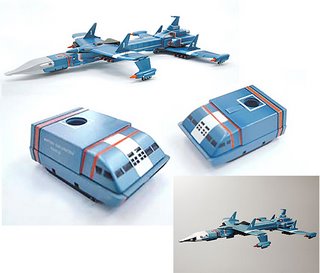 HAPPY BIRTHDAY
TO ME!

Your Aardvark is now 50.

"Isn't that cute." the agnostics and atheists are saying. "He has issues with a myth...."

He believes that Death is not a kind of creepy pal, but is in fact the Final Enemy, and he is not happy about it. The Aardvark likes life, and because he has only experienced life here, he has no basis for comparison, and is not sanguine about Major Change. He believes in Heaven, looks forward to it, but is in no hurry. The big Five-Oh only aggravates the issue, because What Has He Done With 50 Years, And Where Did They All Go?

The younger 'varks and the Dread Dormomoo all went out of their way to ease the blow by distracting him with presents, and cake. It went a long way. The list of Goodies includes:

A most excellent Zero-X picture!

But ... I didn't even know there WAS a McFarland Jonny Quest diorama.

How about a picture of that??