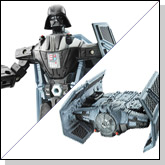 What vile miscegenation is this? Star Wars over-merchandising was not enough. Now there must be an unholy melding with the Transformers franchise. Hasbro's ad-mensches worked overtime for their big slogan:

"Introducing the next wave of Star Wars TRANSFORMERS – vehicles and mechs that are MORE THAN MEETS THE EYE!"

Kinda gives you chills, du'nit? I mean, Stan Freberg himself would be hard pressed to out-do the screamin' obvious.

I hate Star Wars. This from one of the Krelboyne horde that saw the original scores of times in college. Rather, I hate what Star Wars became, twisted to the Dark Side from the original vision of the creator. How allegorical. And now this: Star Wars Transformers. Luke and Co. are both characters AND mechs.

Good one! I like the Movies, though, Lucas should have HIRED writers as the dialogue stunck. Over-merchandising is rampant. Look at all the Lord/Rings crap out there. As if they don't make enough from the movies themselves.