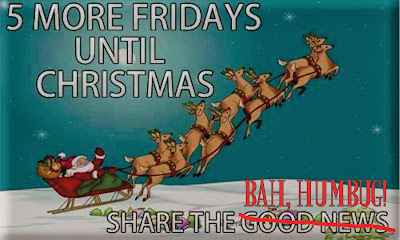 Note that the Hallmark Channel has already been running Christmas films for at least a week now.

(Actually it's sort of hard to tell a Hallmark Channel Christmas film from their usual fare. The only real difference is that there's a Christmas tree in at least one scene.)

Hallmark: When you care enough to BEND the very best.

I have decided, for this year, to find the more traditional 12 days of Christmas, and celebrate those as rightly as I can. I believe, actually, iirc... those follow Christmas day itself. Hmm, I probably need to find proper candles though, and maybe a small prayer guide.

Yeah, I noticed. Before Black Friday, even the earliest ones? Come on, sellers must be extremely desperate! That's all that comes to mind. A really bad year and they are hoping for something, anything, better. I hope they fail miserably. Black-hearted monsters make my old kind seem quaint. At least we were honest. :p

What really pounds my chops is that I'm old enough to remember the "Hallmark Hall of Fame" specials. When you saw that crown on the television it may have meant something you might not be interested in, but it also represented a quality production. I remember "Amahl & the Night Visitors", several versions of Shakespeare plays, Julie Harris in "Pygmalion" . . . the list goes on and on.

Sadly, however, Quality does not equate Profit in this society and, all too soon (and unable to match the competition from other sources, such as "Masterpiece Theater"), "The Hallmark Hall of Fame" degenerated into yet another panderer to the lowest common denominator. Pushing Form over Substance. The Hallmark Channel's flagrant disregard for holiday propriety (do they seriously think EVERY production they've made is worthy of air time during this season?) does nothing to benefit the human spirit, and I hope it does even less to fill the pockets of Hallmark's CEOs.