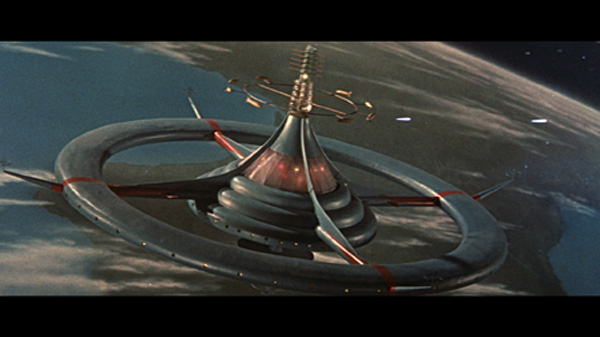 Tonight on Svengoolie! "The Leech Woman".

I picked up the Toho Collection, with "Mothra", "The H Man", and "Battle in Outer Space". Greatly fun stuff! It has both Japanese and English releases, and for "Mothra" and "Space" there is a commentary track. Faboo!

OK.I may have to give Roddenberry his due. The retconners have long said that the Great Bird's motivation in creating "Star Trek" was to help mankind with the evolution of the species to an altruistic, non-capitalistic society. My take has been that he wrote a concept to sell, which was bought, and which helped the evolution of his bank account. Ishiro Honda made his sci-fi movies with an eye toward world peace, and nuclear non-proliferation, at least that's the story from the commentators. I do have more faith in that angle, than the burbling about the altruism of Star Trek and its progeny. The Japanese post-War psyche was a tad ticklish as regards The Bomb, and every opportunity to decry it was utilised agin' it. This continues into the anime age today.

The anti-nuke drumbeat is understandable, and provides the rhythm for the three movies. "Mothra's" "Infant Island" is first revealed as a Bomb-blasted atoll, with a jungle surprise farther inland. "The H-Man" involves fallout-induced spooging, with people exposed turning to suspiciously "Blob"-like gel.  "Battle in Outer Space"is less obvious about the nuke thing, but is a paean to peace.

The films are visually excellent. I have only seen the dubbed versions, as I watch them while I print shirts, and cannot take the time and attention to read subtitles. "H-Man" is a treat, with Paul Frees providing several different voices. I saw part of "Battle" in the '60s on a Dillon High School band trip featuring none other than Ben Bernanke his own self. I remembered the saucers firing their rays, and had wondered what the movie was. Well, now I know. Great stuff!
-------------------

Now we have Star Trek "Operation-Annihilate" on, one of my favorite episodes. It is loaded with extended phaser effects. Very nice. The plastic puke puppet master aliens are effectively creepy, and Spock's battle with the pain of the creature trying to subsume his will is an exercise in stolid Vulcanity.
------------------

"The Leech Woman". Dreadful. (The link is spoiler-filled.)

Nice collection, and I agree with you on "Battle in Outer Space" (which still holds up today in spite of my son's efforts to poo-pooh it). This movie in particular showcased something that I feel hasn't received enough recognition: the various "ray effects" which would appear in a lot of Toho's SF films. I don't know who in Eiji Tsuburaya's crew deserves the most credit for the rays (if not Tsuburaya-sama personally), but the lethal beams emerging from most of the Toho film SF hardware always impressed the heck out of me.

I have that Toho set. Battle is the reason I bought it. Don't care much for the other two.

You mentioned Paul Frees. Just got the complete only season of Fractured Flickers and he's "all over the place"!

The Leech Woman? I dated her for awhile. "I am the EMO-tional black hole who will suck the very life from you!"

I have this flick but only because it's part of Universals' Classic Sci Fi Ultimate collection.

"Which means these recordings are for the sake of future history ... If any ..."

@Jay --- It occurs to me that without Paul Frees we never would've been able to fight World War II. I mean, who else was going to do voice-over work for all those Japanese officers in the movies?

@Jay- The first time I heard the word "spooged" was on "Space-Above and Beyond". The captured Chig was innocently given water out of kindness. It was apparently deadly poison, and it proceeded to convulse, and emit green foam from every head orifice. "He spooged!" one of the crew said. I have used it sparingly in like contexts since.