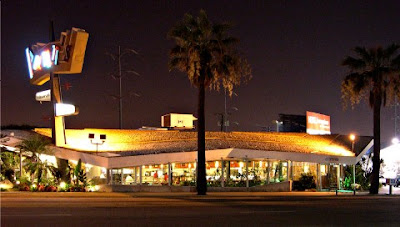 Been away for days, bereft of electron flow. The N. AL tornadoes of Wednesday last took lives, property, electricity, and the Internet. We got power back on Saturday, and the 'net today. Our lives and property are intact, thank The Maker.

I have been going through io9, and learned that the architect who brought Googie to the world passed away last week. He brought soaring optimism for the future, and cast it into brick, mortar, glass and steel.

One of the commenters, otakuoverlord wrote:

People were so amazingly confident that the space age would transform humanity into a (...yes, predominantly white) utopian society amongst the stars. We went to the f**king MOON at the same time you could grab a shake inside a giant polygon primitive. That's awesome.

Racism removed, why can't we feel that way about the world again?

There it is again, the ever-present need to peel open the scab, make the wound bleed, apologise for past errors, real or imagined, one more time. My response was (this is not the first time I've dealt with this issue):

This makes my horse-pummeling point of weeks ago for me. "Race" did not even have to enter this discussion. We cannot feel the optimism of the past precisely because our faces are constantly ground into (real and imagined) social sins of the past. The caricature of "church" ("You filthy sinner" messages, like that) is alive and real right here in post-Christian Sci-Fi-dom.

Keep picking the scab. Of COURSE it will heal without a scar.

The book of Proverbs says "A foolish son is the calamity of his father: and the contentions of a wife are a continual dropping 19:13" One of the symptoms of a contentious wife is that she will not forgive...she will not let something go. She rabbits on and on about it. There is no peace, because there is no forgiveness. Herein lies the reason for our doldrums of pessimism.

The cartoon church that the world despises has old ladies of both sexes pointing bony fingers of indignation and intoning condemnation upon the miscreant. While there is no dearth of people who raise their own esteem by lowering yours, the church for whom Christ died does not operate that way. Forgiveness in Christ washes away, expunges, cleanses you of all unrighteousness and guilt. Little wonder that baptism is such a potent command for entry into the Kingdom. Once the sin is pardoned, as far as God is concerned, it never happened. He forgives you, and doesn't bring it up again.

Enter our racially-sensitive society, with a guilt-mill cranked by so-called "reverends" Jesse and Al and all. The nation has confessed and repented endlessly for the acts of our forbears, things that we have not done, but their guilt has been imputed to us by a political transubstantiation, making us the slave-owners of the 1800's and Southern Democrats of the 50's. These alleged ministers of the gospel do not have the grace to forgive; instead they lay the same sin at our door year upon year. There is little wonder that there is so little optimism. You cannot feel good about the future when weighed down by guilt, real or imagined, from the past.

The gospel teaches that we in Christ grow from faith to faith, reflecting Christ from glory to glory. The picture is one of upward growth. The modern mavens of the racial anti-gospel, anti-christs like Jackson and Sharpton, smear undeserved guilt on our society, and profit thereby. "But let justice roll down like waters, and righteousness like an ever-flowing stream." the prophet Amos said, and Martin Luther King Jr. quoted the vision. The current crop of race-baiters and guilt merchants have trampled and repudiated that vision. Proverbs also says that without a vision, the people perish. Denied forgiveness by the wealthy and politically powerful merchants of race, how can our nation expect to have optimism about the future?