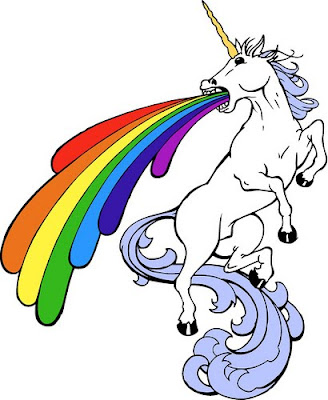 The President was positively "pastoral" in his speech at the Tucson Funeral Pep Rally. He spread the unguents of healing as well as might any priest. Maybe he picked up something other than a hatred of historic America during his tenure as a member of Jeremiah Wright's congregation.

Or perhaps not, for he sets us on a national course to the United States of Lisa Frank.
Referring to nine-year-old Christina Taylor Green, President Obama said:

I want us to live up to her expectations. I want our democracy to be as good as she imagined it. All of us - we should do everything we can to make sure this country lives up to our children's expectations.

Christina was born on 9/11/01, and has had the Burden of the New Normal on her small shoulders ever since. She has borne it well, being:

an A student, a dancer, a gymnast, and a swimmer. She often proclaimed that she wanted to be the first woman to play in the major leagues, and as the only girl on her Little League team, no one put it past her. She showed an appreciation for life uncommon for a girl her age, and would remind her mother, "We are so blessed. We have the best life." And she'd pay those blessings back by participating in a charity that helped children who were less fortunate.

Quite the achiever, but she was still only nine.Unless she was a former-day Helen America

It is a terrible thing to die so young, filled with such promise, such purpose. I can only assume that alongside the drive to excel, excel, was a nine-year-old little girl who liked unicorns and rainbows. That would best describe the course our President has charted for the nation ("I want us to live up to her expectations. I want our democracy to be as good as she imagined it."). President Obama, who cannot get that our nation is a Republic (but then, neither can Hannity and his ilk), wishes to steer us to the vision of a nine-year-old, a vision of softball and unicorns and rainbows.

Perhaps, though, that is a better course than the one he has taken up 'til now. On the other hand, the Children's Crusade didn't fare too well. Then again, with the wide-eyed credulity of the Body Politic, buying into Bailouts and Democracy and The Fed, oh, my!, maybe the course has not veered much at all. America may well be becalmed in the doldrums of a nine-year-old's political fantasy.