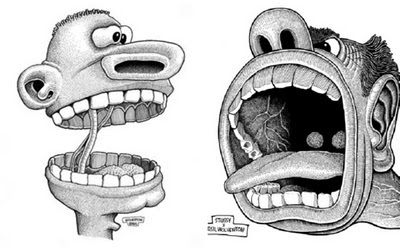 
I just heard that phrase again, in the context of the terrible Arizona massacre: "the political conversation. I am amused beyond giggles at the idea of a "conversation" on the political scene, unless you consider two people shouting at each other simultaneously to be a conversation. One side is not listening to the other, period. One side is loudly reading a reasoned treatise, and the other is shouting LA-LA-LA-LA with fingers firmly in their ears. No communication, just blather.

The left-liberal-Progressive crowd are FUH-FUH-FUH-ing about the need to limit political debate and polemical opinion in the name of civility. Let's abridge God-granted civil rights in the name of Nice! While we are at it, let's limit gun ownership by the law-abiding because a sad, mind-twisted idealogue nut shot up a political rally. (His fondness for The Communist Manifesto and Mein Kampf places him firmly on the Left end of the political spectrum.) Never ones to let a good crisis go to waste, they reliably trot out the same old nostrums for problems that don't exist, and which would not solve them if they did.

The renewed bleating for the re-institution of the Fairness Doctrine is equally feckless. During the heyday of Fairness on the airways, assassins had their heyday as well: JFK, RFK, Martin Luther King, Jr., Malcolm X, John Lennon, Lee Harvey Oswald, attempts on Richard Nixon, Gerald Ford, and Ronald Reagan. Fairness is not conducive to civility, as fairness is as elusive as the tooth fairy or Lucky the Leprechaun. Despite its being a liberal virtue, the enforcing of fairness no more solves differences of opinion than forced desegregation made white rednecks invite blacks to Sunday dinner. It is an old point here, but a law or regulation will not change my heart. It MAY affect my behavior, but maybe not. The kindergarten whining about Fairness is a dodge, an excuse to limit opposing points-of-view. If (true) conservatives gain ascendancy in 2012, may they take a strictly Constitutional view of speech and opinion. To do otherwise will give the lie to their ID.
Posted by The Aardvark at 1/11/2011 05:23:00 PM