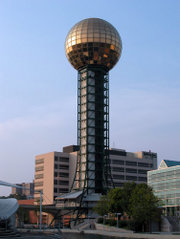 So THAT'S why his name is Johnny Knoxville.

The redoubtable host of Jackass has an odd name. Why not Richard Peoria, or Paul Schenectady?
Now, I have never been impressed by his acting acumen, and the Cultural Excellence for which he stands hasn't won points for him. either. This Aardvark has, however sussed out the why of his nomen.

We went to Kajonk-a-Con this weekend. We did the official con shirt, and set up in the dealers room...which was part of a single larger room. The convention was held at the Knoxville Convention Center, the warmed-over site of the 1982 World's Fair. You never heard of that?

Since that time, the city has angsted over what to do with the property. The Fair's theme tower, the Sunsphere, which juts proudly 266 feet skyward on the Scruffy Little Skyline, and was so ably destroyed by Bart Simpson and Crew in That Simpson's Episode, has been tenantless for years.

The Fair site is now run as the Knoxville Convention Center.
It is run by thugs.

Kajonk-a-Con is the dream of Damian Zannini, a likeable and rail-thin student with a love for anime and gaming. No mere geek, he; Damian engineered the con with little help from anyone else. He has a business partner, but the vision and impetus were Zannini-san's.

The Poxville CONvention Center's staff began to load additional charges at the last minute, including charges for electricity, insurance, and "security" (which security allowed the theft of some vendors' merchandise: one was hit for $800 worth of goodies. One rent-a-cop "got cold", and actually "borrowed" two shirts from another vendor's covered table after hours to use as a blanket. He DID return the then-used merchandise to the dealer the following morning). In a final "we really don't want you here" move, the Officials claimed that the convention's checks "had not cleared" and that they would require the full amount in a cashiers check "in 40 minutes" or there would be no convention. While the CONvention Center staff were technically correct- the checks had not cleared- they neglected to add that they had not cleared because they had not posted at the bank, BECAUSE THEY HAD NOT DEPOSITED THEM. I saw the actual checks.
There were three: only one had even been endorsed. They were going to axe Kajonk-a-Con by fiat alone, and one vendor had come from California!

Word to the wise: under NO circumstances do business with the Knoxville CONvention Center.

The good news is, the Kajonk business partner -a VERY nice guy, does business with several good lawyers and judges in the area. I don't think that the Poxville CONvention Center has heard the last of Kajonk-a-Con. But I AM certain that they have squeezed the last shekel from those guys.

The convention was FUN, they had GREAT gaming prizes, like cases of Bawls, as well as game computer cases, power supplies, and such. They are not pikers. Do these guys a favor. Go to their site, and buy a con shirt from them. They went $5000 over budget because of the predations of the lice that run the CONvention facility. You'll get a comfy shirt, and a warm feeling that you helped some really nice guys with a dream.

Go to Kajonk-a-Con next year, too. It will be held in Knoxville, but at a Marriott or Ramada-type convention hotel.

...unless they wind up OWNING the Knoxville Convention Center when it's all over.

Dude. Johnny Knoxville is a cultural icon and one of the most talented souls of our time.

Cut the man some slack.

Hey, it's OK.
I even welcome goobs to my blog!

If you are going to make accusations against people, do so, and sign your name. I know nothing beyond what I personally experienced. That trumps "anonymous" any day.

"Super_Nova_Star"
That's a neat NAME.
I would have been beaten up on the playground with a NAME like that.

Here's the skinny, Supes.
This is the Internet.
Anyone can say ANYTHING about ANYBODY. If the guy has family problems, it is truly sad, and perhaps tragic.I met a guy for a couple of days at a convention, who was polite, and was trying against odds to make a project work. He did not insult my mother or try to kill me with an axe That constitutes "nice guy" status..
Perhaps I should have said "Seems to be".
If you have such care for his putative family, then you would do well to help them. Give them rent money. Buy some groceries. Help with lawyers fees. DO SOMETHING.
Complaining on a small-fry blog is NOT "doing something".
If the person under question is so loathsome to you, confront him. Maybe you can bring him around. That, too is "doing something".

Bottom line. Your fussing about it HERE is wasting time you could be spending
helping the ones that you have such concern over.

Understand this: if your assertions are true, then I am as horrified and angered as you. First impressions can be deceiving. I am merely commenting upon my impressions of my experiences in Knoxville.

But again, if you know the situation and the persons involved, then you can do something to be of help, and should.

You should also know that I cannot leave your comments up for legal reasons. There are libel laws.

Thank you again for all your kind words and support. Hopefully we'll meet again soon :)

Thank you for sticking with us, and thank you so much for all of your generosity. I loved your blog entry! K-Con 07 will be unstoppable. :)

Anonymous, I see you peeking.