The Light of Eternal Mind

Allow me to tell the tale of the time I parted Lake Ansley Moore in Laurinburg, NC. The lake bisected the campus of St. Andrews Presbyterian College. My roommate and I were walking across the causewalk that bridged the lake to the classroom side, discussing favorite movie scenes. I brought up the Parting of the Red Sea in deMille's "The Ten Commandments". and stood up on the edge of the low wall along the walk, faced the lake, raised my hands and in my best Heston shouted "Part!" There was a noise, and the water below me began to roil and separate. My roommate's jaw hit the pavement in surprise, and I was a tad surprised as well. The water continued to part and spread out before us, with the sound of rushing...wings.

The lake's flock of coots had, unknown to me, been resting just under where I stood. My cry had frightened them, and they flew out into lake, as ducky things do. It looked like the lake was parting before us.

Never a video camera when you need one!

Watching "The Ten Commandments". I LOVE this cheese. The Bible was not spiritual enough, so deMille had to add text. " ... And God said, "Let there be light. ...... He is not flesh, but spirit, the light of Eternal Mind."

The Light of Eternal Mind. Theosophy much?

Such a fun romp, though. The effects are wonderful, and hold up after all these years. If the stone tablets were not written that way, they probably should have been. Whirlwind of fire. Epic. 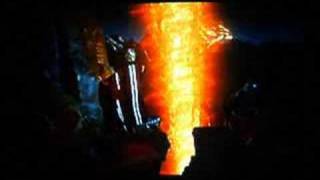 The Plagues were also interestingly filmed (perhaps an odd thing to say about plagues, but . . .). The way the final Plague was depicted still sends a chill down my spine.

The plague of frogs was filmed, then edited out at the last minute. DeMille feared the image of Egyptians running from frogs emerging from the bloody Nile would offer a comedic touch that he wished to avoid at all costs.

The fiery hail was painted popcorn, with animated fire added.

"The fiery hail was painted popcorn, with animated fire added."

If you want to see a real DeMille gem then take in The Sign of the Cross.

The restored to full original 125 min. PRE-CODE version. Needless to say, you will be aghast! Saw it on TCM. Stuff in it that disturbed even me.

@ Aardvark- I remember your telling me about the parting of the coots (We call them Spanish Divers up here.). A friend of mine & I were out hunting woodchucks one day at his farm & the "spring peepers" (Tiny lil' frogs.) were out in force. You couldn't see 'em but you sure could hear 'em. Well, my friend, in a calm voice tells 'em to quiet down ... And the whole field went silent.

I was a little wary of him after that.