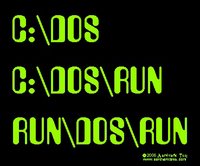 A sort of braglet...sort of.

Is it bragging, when you acknowledge that it's not your fault?
Our little family business has been putting along since around 1990.
We print t-shirts. Shirts for little rural ball teams, shirts that are becoming nationally known,
shirts for anime fans, gamers, political shirts, snarky shirts.

We have chugging along, primarily doing custom t-shirt printing: school, church and business shirts.
We began selling generic Sci-Fi and fantasy shirts of our own design at conventions, as well as swapping dealer space for printing official con shirts. People liked our stuff. Above was an early favorite. Didn't matter if we were at a con, or at a craft show next to ladies who sold wooden cutouts of cows...people loved that shirt.

Enter the realm of exponents! Our business has grown amazingly, and for the main reason that the original Sci-Fi cons existed: the fans have no better place to go! The conventions serve as a kind of cultural church, an ecclesia of the odd. School acquaintances don't relate to the people who would rather watch Totoro, and dress like Witch Hunter Robin. The need to be with fellow fen drives the trend. That, and the fact that it is a convenient place to get stuff: DVDs, soundtracks, toys, models, costumery. Our shirt designs are in fact ours for the most part, and no-one else has 'em. Our shirts and staff are developing a fan following of their own.

And that's a real kick!


We are astoundingly thankful to our Father, and to our many customers and fans, who have enabled us to have a livelihood that we truly enjoy! Thank you! We'll keep doing cool stuff.
Posted by The Aardvark at 2/07/2006 09:59:00 PM