MeTV is on...watching "Superman". I am shocked at the character actors who are in it. Double Trouble  featured Jimmie Dodd (Mickie Mouse Club designated adult) as the fingerprint guy.  The Runaway Robot  features Russell "The Professor" Johnson as the head hood, and Robert "Phones" Easton as a yokel radio operator. Oh, wait... Also, John Harmon (Tepo from ST-TOS "A Piece of the Action") plays Mousey, a henchman. 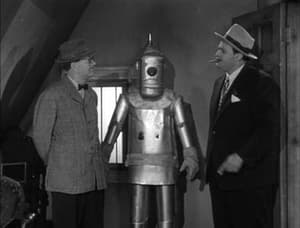 Precisely what rights is she fighting for in her satin tights?

John Saxon playing a Nazi agent, who winds up playing on Paradise Island, because of the Plane.

How do Amazonians reproduce? Parthenogenesis?

Star Trek- "A Taste of Armageddon".

A favorite of mine. Barbara Babcock as Mea 3 helps.

There is an almost Irwin Allen-level of prop recyling in Star Trek.

Yeah, watching old shows and movies... it's like only a thousand people did most of the major to bit parts in all of Hollywood per generation, or something. It always amazes me to see so many other other faces I had forgotten where in things, or when I watched back when didn't know, as they hadn't become famous.

As to Amazons? They steal men, breed with them as captives. If the child is a boy, they kill the child and the father. Yeah, doesn't work in any sense. But you did ask.

I actually keep thinking about buying the series, in bluray if I could find it, or dvd. I think the price has always been so shocking that I just haven't bothered. I'd burn through them a time or two, then just set them up with the rest of my collection. Some of the dolls on the show were truly stunning. From a time, even when we were all supposed to be beyond mere wants and needs, they still went with quite feminine females. Or, maybe, that is just comparing then to the drought of true femininity of today? Maybe.

Finished an Evangelion/Superman crossover on fanfiction.net recently titled: Last Child of Krypton. Done by one calling himself Chuckman.

Was getting a headache from rolling my eyes too hard over the concept til I actually read it.

Music cues from the movies, the Max Fliescher 'toons and the '50s show were running around in my pointy head while reading. GREAT STUFF!

Was watching "Riddle of the Chinese Jade", and we get to a scene where Superman claws his way through the street to rescue two people from a chamber which is slowly being flooded after the Bad Guy opened a spigot. Once the rescue's made, Superman tells the police to send some men down there to turn off the water.

And I can't help but be thinking: "Hey! Man of Steel! Maybe you could've turned off the water yourself WHILE YOU WERE DOWN THERE!"

Nobody is perfect. Plus, his tights might have been killing him by the time he realized his mistake. Wet tights are just the negative definition of the schizzles. :p

@Doom: Now I've got this mental image of Superman flying back to Smallville, going: "MOMMMM . . . can you let these out some? Please?"

(And I now must presume Lois Lane never saw Clark Kent in a pair of tight swim trunks.)