Watched "Scrooge" this afternoon. Wonderful musical, and the title cards are by Ronald Searle:

NOW! Vincent Price and Anne Baxter as Egghead and Olga, Queen of the Bessarovian Cossacks.
Egghead loves Olga, who demands an enormous dowry to wed him. He plans a series of heists to raise the requisite rubles. Will true love win? They even steal a huge amount of caviar. Ghoti Ouefs anyone? 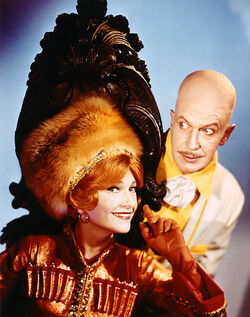 
"The Space Family Robinson go through a food crisis when their plant purifier breaks down. Will and Dr Smith discover a travelling show of circus people, and Will is later tricked in to agreeing to join. It's a race against time for the Robinsons to save Will, and keep themselves alive.

James Westerfield, a Nashville boy, plays Marvello, the ring-master of the circus.


He was often seen in Westerns, from "The Rifleman" to "The Wild Wild West". His grizzled looks and Southron voice made him suited to playing kindly uncles as well! 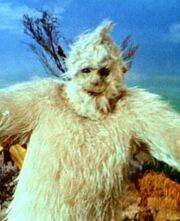 Star Trek - "Friday's Child"  Winner of the "Most Egregious Use of Faux Fur by Burly Men" award.

This is a D.C.Fontana written episode, which makes it sad, because she is usually so good. The costuming turns this into farce. Julie Newmar plays a pregnant wife of the Teer, leader of the Ten Capellan Tribes. If Mars needs women, then the Federation needs topaline, which the Capellans have in abundance. The Klingons are in need as well, and a Capellan is playing the two against each other.

Here is the Memory Alpha writeup. I'm not interested enough to keep writing, even with Julie Newmar and DeForest Kelley slapping each other.

The smooth-forehead Klingons are really weenies. No wonder the grater-heads won't talk about them.

Walker Edmiston sighting, as the voice of the SS Deirdre.

Oochie woochie cootchie coo.
----------------------
Svengoolie presents "Frankenstein Meets the Wolf Man". Lon Chaney Jr. as Larry Talbot. Bela Lugosi as Frankenstein's monster. Curt Siodmak wrote the screenplay which began as a semi-joke to get himself a job so he could buy a car.


During lunch at the Universal commissary, screenwriter Siodmak had joked to producer George Waggner that he had a great title for a new film in the series (half-heartedly — he needed a down payment for a new car): "Frankenstein Wolfs The Meatman". Waggner, not known for a casual sense of humor left to have his lunch; shortly thereafter, he called Siodmak to his office, telling him to "Change the title to Frankenstein Meets The Wolfman — and go ahead, buy the car." Dumbfounded but pleased, the writer went to work. Thus that next film was Frankenstein Meets the Wolf Man, which served as a sequel both to The Wolf Man and The Ghost of Frankenstein. - Wikipedia


Siodmak wrote lots of movie and radio scripts, most memorably "Donovan's Brain". He presents both Talbot and the Monster as pitiable creatures. Talbot, who was resurrected by a confluence of grave robbing and the full moon, now only wants to die, and seeks out Dr. Frankenstein's secrets of life and death. He finds the Monster, frozen in the basement of the burnt-out castle. He is blind, and much shorter, being played by Bela Lugosi. Poor Bela. He expected to speak in this role. Surprise!

The international drone submarine deterrent force is getting hinky. Roger C. Carmel guest stars as an *ahem* Eastern (Bloc) admiral who has worked with Admiral Nelson to develop the drone fleet.

Autonomous unmanned nuclear missile subs. Over 200 of them. This should bode well.

Carmel does his Harry Mudd schtick as he begins to destabilise the system by sabotaging drones so that they fire on us!

Harry Mudd! One of my favorites.

You now there were a lot of ways TNG did better than TOS, and don't get me wrong, I'm a fan of both. But. You know you'd never see a character like Harry Mudd on the TNG era Enterprise.

And that's a shame. What they gained in sophistication and polish I think they lost in humanity and soul.

I'll repeat that for the home viewers.

(Could anyone else put so much venom into the word "Klingon"?)

And yes, Harry Mudd never made it into the ST:TNG universe, but I should point out that he's a plot element in the second Star Trek: Aurora adventure currently being put together by Tim Vining (one of the Aurora crew is suffering an interesting side-effect from a "vitamin supplement" which was purchased from a doctor who turns out to be . . . oops! . . . Harry Mudd).

The Charleston MeTV station schedules two episodes of Batman on Saturdays. The bad news is that one of the episodes gets pre-empted by local news.

I offered my services to Vic Mignogna (who is Captain Kirk in yet another fan-done series) to do Harry Mudd. I'm a little short....

JG Hertzler (Martok) is slated to do appear as Mudd down the pike. Excellent choice!