The Dread Dormomoo speaks. Herself says “You’ve gone from sounding like Batman, to sounding like Alex Jones.”. No pillow-talk, this. Your ‘Varkness  has enjoyed three fun-filled days Mostly Not At Sukoshicon in Ft. Walton Beach, FL. We came to have a working getaway, and I developed the whatever-passes-for-flu this year. I spent Friday at the con, coughing. I spent Saturday and Sunday in bed, losing my voice in the process.  The D.D. ran the booth, though the pickin’s were slim. I’ve spent two or three of this brand of con breaking even, and  sorry,  but I can break even at home.

The kids at the con were nice, and staffers were quite helpful to the missus, since, as the “Lost and Faust” Victoriana dealer put it, she had lost me in a poker game.  This can neither be confirmed nor denied.
----------------------------------
The trip was not a total wash. Friday night my last hurrah was going with the Dread Dormomoo to Floyd’s Shrimp House. They had an “All you can eat popcorn shrimp” special, so I had that, milady had jack. No, she did not go hungry, she had a grilled whitefish,  amberjack. The fish was excellent, as were my shrimp. The "all you can eat" was a prophecy rather than an offer, because it was in fact all I could eat. 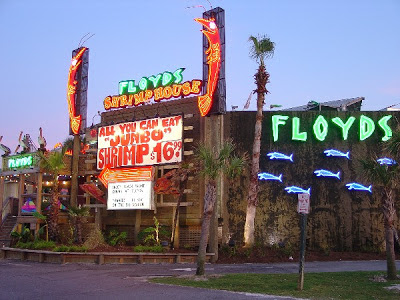 A note. I have eaten at two very good seafood places on the Gulf Coast, and they both have the same deficiency: cocktail sauce. Cocktail sauce is a simple condiment: ketchup and horseradish. Period. It does what it is required to do, adding a piquancy to the shrimp or whatever you bless with it. It does not require cilantro, or lemongrass, or hobo's purse, or whatever herb you cram in it to make the sauce your restaurant's "own". Henceforth I shall take my own.
----------------------------------
We spent an extra overnight, and had a leisurely trip home Monday. The restaurant we wanted to breakfast at because of local legends of its Eggs Benedict was closed on Monday, so we breakfasted at the Panda Buffet. I had no clue that there were so many extant Panda recipes. The place had the standard fare, a hibachi/Mongolian BBQ arrangement, sushi and the like. My taste buds were responding on only the basics. I could discern sweet, salt, bitter, and sour. No other nuance. That said, the place was quite good, even with a limited palate palette. I goosed the hot and sour soup with a little more vinegar, and it was fine.

We stopped a little north of Fort Walton Beach to visit the Air Force Weapons Museum, an excellent side-trip. Bombs, missiles, and planes from WW1 'til now are on display. I touched an SR-71!!

And I found an Aardvark! 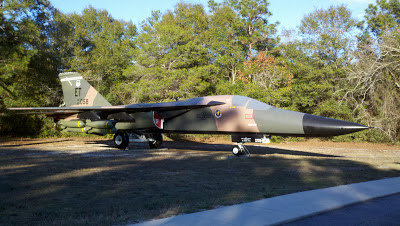