I have a terrible, overweening fondness for kitsch. Really love it.
Nothing is kitschier than old-school horror hosts like Zacherly, Vampira, and Ashley Ghastley.
Doctor Morgus is the ne plus ultra.

But now, the ridiculous offerings we have syndicated are blended tapioca, with a few flakes of cayenne for spice. Elvira is just a girl with two enormous...talents, 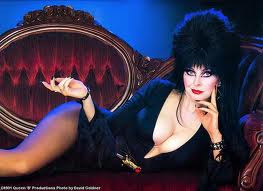 and the entire show is a way to make jokes about...them. The movie offerings are public domain horrors..."Shock Theater" on the cheap. Elvira has caricatured herself in this incarnation. Her syndicated "Movie Macabre" has at last expired, though a few rattling gasps can be heard on outlying stations. Atomic Mystery Monster at the Gravediggers Local 16 blog writes:

While Cassandra Peterson is a very talented person (I love her albums and her two films were hilarious), I’d be kidding myself if I said that her looks had nothing to do with her success. If you had some guy in black spandex telling jokes about his junk instead of Elvira, Movie Macabre wouldn’t have made it past the pilot stage. Another thing to consider is how a lot of the people who slag on Mystery Science Theater 3000 often give Elvira a pass on doing the same thing, simply because they’re attracted to her.

Wolfman Mac is another story. 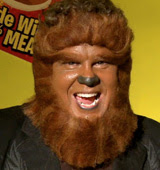 He hails from Pontiac, MI, and has a very involved ensemble with a cast of eighteen characters, like Boney Bob, Ivanna Werkagenn, and Torg the Robot. Part of their formula involves inserting themselves into the (again, public domain orphan) movies via bad video effects and rude sounds. Nothing like mature love of classic cinema.

And believe me, this is NOTHING like mature love of classic cinema.

I understand the role of public domain features. There are some corking good orphaned movies out there, but most are that way for a reason, shame being my first guess.  The need to have free movies to show goes a long way to convincing small local markets to give you a chance. Now Mac and Co. are on RTV, seen across this broad land, and the offerings are no better. His production skits are more than adequate, and he sprinkles classic commercials, quirky educational and industrial films, and Drive-in concession ads liberally when his actual featire is short. (FEATURE is SHORT...I could write for Elvira!!!)


The less said about Ivonna Cadaver, the better. Her Macabre Theatre (seems somehow familiar!) is another public domain film-fest! Riatsila sez that watching this is like eating Bob Evans pancakes, and being disappointed because they aren't Cracker Barrel.


My current winner for Doing It Well is Svengoolie, a Chicago fixture in Creature Featuredom. Rich Koz, the current Svengoolie, is a master of the art. His use of sound clips is masterful (he even uses Stan Freberg bits...da man has CLASS!), and he is quite a good song parodist. His schtick is as well-worn and comfortable as your favorite slippers (how dated is that?), and his timing is excellent.

Plus, he pays for his movies. 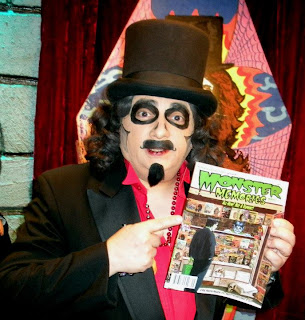 The classic Universal Monsters are his mainstay, and I must say, for the first time, I am enjoying them. Saw "The Bride of Frankenstein" Saturday night, and MERCY! That was a great movie. The Franz Waxman score was eminently recognisable, as much of it was re-used in the Flash Gordon serials. Elsa Lanchester as the Bride was beautifully photographed. I must say that I understand The Creature's fondness for her!

Give Svengoolie a try. He is the closest I've seen to the classic horror hosts of yesteryear.

We've got Svengoolie here in Charleston. While he does all right in the openings and closings, I feel there's way too much of him during the movie.

I grew up watching PROJECT: TERROR on Friday nights out of San Antonio, as well as SHOCK and AFTERSHOCK on Saturday nights in Austin. No comedians or anything like that; just a creepy opening and then . . . On To The Movie!

For my next trick I'll yodel.

Yeah, Svengoolie is very...present, isn't he? He is still less intrusive than the normal (?) horror host of today.

Y'know, I never had thought of Joe Bob as a "horror host", even with TNT's Monstervision ( I REALLY miss that!)

I await the yodel.