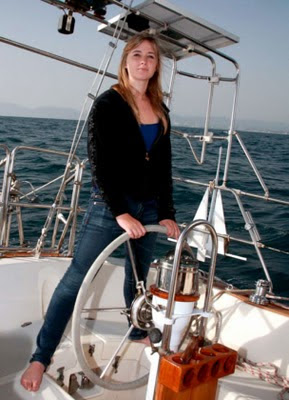 So the cries of outrage begin. Abby Sunderland, the 16-year-old sailor who attempted to sail around the world solo, ran into equipment malfunctions and had to be rescued, has a cadre of supporters coming to her aid.

The parents should be charged with child endangerment!!! (commentor on NBCSports)

Geraldo has proclaimed her homeschooling parents as "kooks", and divined that she was seeking escape from her parents' control. Where's that Psych degree, G.?

Abby, whom I do not know, even though the Dread Dormomoo and I are part of the same kooky homeschooling thing, is apparently a self-starting ambitious person, with a strong sense of competitiveness. Oh, if only she had used her skills in a meaningful way, like wresting the captain of the football team from the clutches of the head cheerleader. Wait...she would probably be the head cheerleader, if only she had been public-schooled.

Alas, she was homeschooled, and had kooky ideas, ideas above her station, ideas like SAILING AROUND THE FLIPPIN' WORLD ON HER OWN! And she tried it. And she failed. And she wants to try again.

Idiot. She COULD have been hanging around with gang-bangers and drug peddlers in the halls at school, but NO. She and her family think that they are BETTER than everyone else, and that being able to read, and do sums, and navigate the globe have some intrinsic worth. Heck, she probably knows the meaning of 'intrinsic'. Uppity thing.

Kiddies, let me be clear: if you do NOT want your kids to be self-motivated, intelligent, willing and able to take risks and rise above their failures, by all means, do not be a kook.

Send 'em to government schools. I'll guarantee, you won't have to worry about their accomplishing anything out of the ordinary.

'Vark I understand you were using it humorously, but if you could never use the phrase "Word to your Mother" ever again, I would truly appreciate it.

Also avoiding "It's all good," and anything with izzle in it would make me a happy man.

On a more serious note, this whole brouhaha over the sailor girl strikes me as an excellent example of just how risk averse our society has become. And when I say our society I don't just mean the US, I mean all of Western Civilisation.

We are so damn scared of what could go wrong that we've forgotten that if you want to do something, especially something big, risks are necessary.

Risk is, unfortunately, not our business anymore.

Living in fear is not a successful long term strategy for a healthy society.

It has been said that I make Wonder Bread look like pumpernickel. Rigel, to REALLY get the effect, you have to imagine my saying it with a real Wisconsin accent, like the school secretary in "Ferris Bueller's Day Off."

Be happy. I was going to title the thing "The Aardvark Goes Street". Dog.

Living in fear is not a successful long term strategy for a healthy society.

Sheer wisdom, there. Remember "The Dangerous Book for Boys" and how popular it was ? Also,"The Somewhat Less Dangerous But Nonetheless Still Somewhat Perilous Book for Girls"? There is some recognition of a need for risk, but the warm soft socialised-everything blankets are SO soothing. I feel so drowsy....

My most recent business venture went down the drain and I've been licking my wounds the last few months. I'm coming out of that phase now and I'm getting back into circulation. Both online and IRL.

Dog. About a decade or so ago I worked nights at a neighborhood gas station. Some local boys would hang out on occasion. My manager had a pretty strict policy about kids in the store, and for good reason. But she wasn't there nights and they never gave me a problem. As long as it wasn't more than two or three I'd let them stay.

They seemed to preface everything they said with "dog". When they did it to me I told them, "Don't call me dog."

They asked why and I said, "Because I'm not a four- legged canine." They were rather obviously mystified by my answer, but they got the message.

Over time something strange happened. Several of the mothers of the boys came in and thanked me. Now it was time for me to be mystified.

Apparently in the time I worked at the station the behavior of the boys had noticeably improved. Based upon what evidence I don't know, the mothers decided I was somehow responsible. I thought they'd overestimated my influence at the least, but didn't see any point in arguing about it so I said, "You're welcome." or something similar and moved on with my day.

As time has passed, and other similar scenarios have played themselves out, I've changed my mind about that. I've come to the conclusion that many of the "at risk" youth of today could be helped dramatically by the addition of a good strong male role model into their lives.(Note: good and strong are emphasized for a reason. Being male is a requirement, but is not sufficient in of itself.)

What's truly sad is that just pointing this out would label me as a sexist misogynist in many people's eyes.

That wasn't really connected to the topic at hand, but I do like to ramble.

And you ramble so well !

Sorry that your business gamble did not pan out, but it is good to see one who is not risk-averse. As to wound-licking, been there.
I'll talk about my photo studio sometime.

Dog. Yeah...I am no fan of the urban patois. One of our church elders, who was a rocket engineer, used to get on mild rants about how American culture was suffering because of the tendency to go with the "lowest common denominator", especially with the adoption of urban ethnic dress, music and speech. I would clench up on the inside at such "racist" old-fashioned ideas.

Then I grew up. (And Lowell was no racist!)

Congrats on taking a firm stand, and helping the lads. It is bizarre how small things can ripple and expand to affect a life.