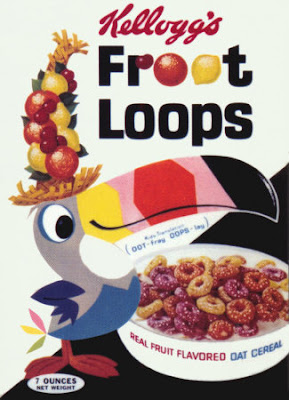 This is REAL Tea Party season. with this week being the watershed. This tax protest movement a-borning is really taking on, and it has me worried. ACORN, it is reported, plans to crash Tea Parties across the nation in an attempt to make them appear kooky, fringe-y and well, Froot Loop-y. A local talk radio guy, Dale Jackson, is taking part in the Huntsville, AL event, and has warned of loopiness crouching at the door. He played an excerpt from a tea party speaker elsewhere in the Union who began by sounding sane-if-excitable, then spectacularly moved off-message, swerving into CrazyTown with a rant about "Obama's hypnotic mind-control speech techniques". Maybe true, maybe not, but irrelevant to the event at hand, and made me squint from the glare of his aluminum-foil hat. The idea is that the ACORN types and Huffingtonians will infiltrate and do weirdnesses to turn the rallies into media circuses crying for cartoon sound FX and a laugh track on the evening news. The leaders of these Tea Parties need a firm hand to keep the events on-track. Area bloggers like this are rattling on about "Violence on Twitter" and "Hate Speech" coming from the tea party movement. My response:

Hate speech? HATE SPEECH? Come on, now. Being angry at being robbed by non-representative government is anger, not hate. Let's get a refresher on our emotions. Throwing around inflammatory terms like "hate speech" is not helping dialog at all, unless of course "hate speech" really means "doesn't agree with us".

The lunatic fringe and crazies have always been around. The Dread Dormomoo ID'd this follower of Jesus:

Luke 11:27 And it happened as He spoke these things, a certain woman of the company lifted up her voice and said to Him, Blessed is the womb that bore You, and the breasts which You have sucked.

Jesus had been teaching, and this lady was so emotionally charged that she...yelled...THAT at Jesus. (Though frankly I'm surprised it never happened at an Obama rally....)

Jesus proceeded to get the situation back on track. He did not scold, but merely said:

Luke 11:28 But He said, No; rather, blessed are they who hear the Word of God and keep it.

(Read the chapter for the whole event.)
Jesus retained control, and prevented the thing from becoming a Springer Moment. I would encourage the leadership of the several Tea Parties to


2) Have some SANE people to work your security (hint...the ones who volunteer specifically to work security...don't use 'em.)


3) Be prepared to remove a speaker from the microphone IF he strays too far from the message and starts huffing ozone. Have an "announcement" ready in case you need a "reason" to reclaim the mike (don't lie, I'm not saying that, but have an announcement ready as a contingency plan. You don't want to appear to "limit free speech" on-camera!)
*NOTE: keeping the message focused is NOT "censorship". It is staying on-topic. The left would portray it as "censorship". Don't give 'em the chance. Imagine the preacher interrupting his Easter sermon to give out his grandmother's Sally Lunn bread recipe. Yummy, but inappropriate. The tea party is not a time to debate, say, FairTax vs. Flat tax. Unite the hearers.

Enjoy the events, beat the drum, stir up the Vital Fluids of the Body Politic, but don't let the day be hijacked by well-meaning loons. Stay on-message, and make this Mean Something, and Lead Somewhere. The Tea Party is not the point...holding Washington accountable IS.
Posted by The Aardvark at 4/14/2009 08:56:00 AM