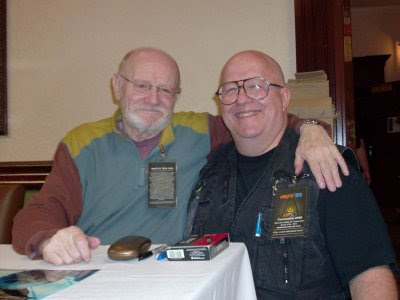 Gentlesouls, this is the Christmas season for our biz, and your Aardvark is running ragged. This weekend past, the indomitable Dread Dormomoo and I were in Ft. Lauderdale, FL (this ain't Arizona, kiddies). This geographical state of being is far less fun than it sounds. Really, now, whose idea was it to make Florida so lo-o-o-o-ong? Driving to Orlando is just a tad farther than Birmingham by my lights. South Florida is somewhere off the orbit of Ganymede. We were not visiting the Mecca of the Discipleship Movement or anything. We were there for Naruto Trek. , a convention combining the two most despised sectors of anime and SF fandom into one huge Reese's Cup of Doom. The cast of the Star Trek, Phase 2 fan films were there, being grimly earnest. Walter Koenig was as well, looking like a 60's Teen Beat cover boy in 2009. The picture above is W. Morgan Sheppard with Your Humble.
He is a sweet man, and delights in his craft, which is experiencing a renaissance from anime and video game voice jobs. I first saw him as Blank Reg in the Max Headroom series. Not to come across like the drum major of the suck-up parade, but finding Morgan Sheppard in a role is like picking an especially yummy sweet from a Whitman's Sampler.

None of the anime voice actors apparently deigned to walk through the huckster room. (Kudos to con founder Ray, who used the correct term for sellers of fannish goodness.) Ray has a love for the fans, and a real desire for the show to be fun. I would encourage him to broaden the scope from "Naruto" to "anime" in general. We did not have a huge business weekend, but did OK. If he broadens the scope of the con, I'll do it again. Even if it's in South Florida.
Posted by The Aardvark at 3/30/2009 04:34:00 PM

Some guys have all the luck.

I agree about broadening the scope to anime. I have not gotten into "Naruto", but I am diggin' 'Bleach" and still working through my Inuyasha addiction.